With its 1200 years of history, Magdeburg is a place where visitors can literally stroll through different eras of the city’s development. Its landmark, the impressive Cathedral of Saints Maurice and Catherine, bears witness to the time as a medieval center of power where politics, religion, trade, culture, and jurisdiction of European significance were concentrated.
The remains of the old fortifications that protected the city for more than 1000 years tell the story of Magdeburg as a fortress city throughout its eventful history that was characterized by breaks, destructions, and reconstruction.
The future-oriented and innovative attitude of Magdeburg’s inhabitants led to establishing an identity as a city of science and engineering. The legacy of inventors and industrialists had a formative influence on the city’s development both physically and mentally. 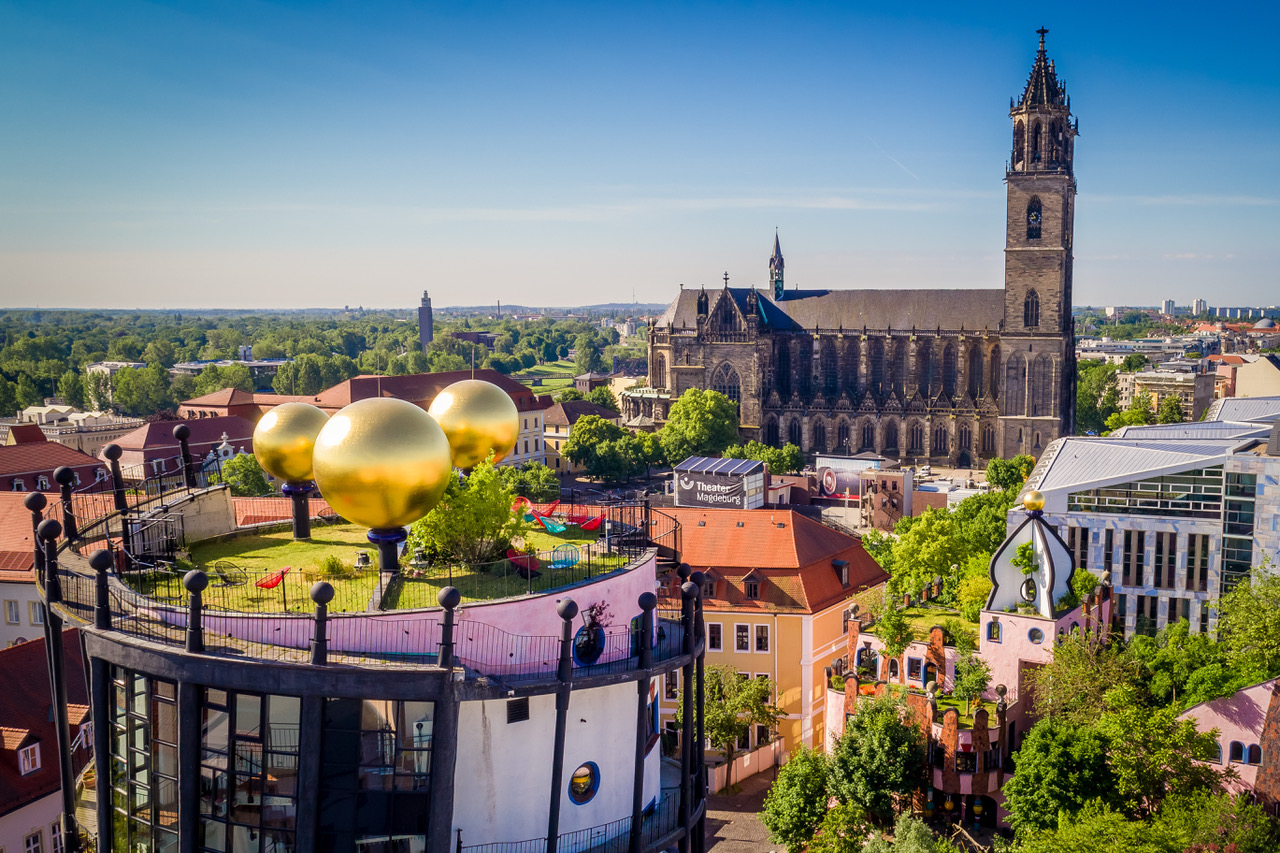 ​Facing several moments of severe devastation, Magdeburg has always proved to be a city of renewal. With their inexhaustible efforts to rebuild the city and reinvent it according to the current needs of the society, over the course of time Magdeburg’s urban planners created a multifaceted townscape in which Romanesque and Gothic architecture can be appreciated alongside buildings of the Baroque, Gründerzeit and postmodern architectural styles. The era of the so-called “Magdeburg Modernism” dating back to the 1920s is representative of an entirely new way of constructing and had a strong impact on the city’s appearance.
The river Elbe forms Magdeburg’s natural lifeline. It accompanied and influenced the development of the city throughout its vivid history. Not least, together with the large number of greens spread throughout the urban space significantly adds to the quality of life and the attractiveness of the place.
Visitors of modern Magdeburg experience a lively state capital with great cultural heritage sites that are made accessible through high-quality cultural offers and events. They learn about an eventful past, stunning achievements, and colorful innovation. Short distances make Magdeburg an ideal place to be discovered on foot, and direct access to the Elbe Cycle Route allows for a perfect combination of a city trip and a bike tour. Magdeburg’s certification as a "Tourism Destination - accessibility checked" with the "Reisen-für-Alle" (Travelling for All) label acknowledges the efforts of the destination management, hosts, and providers to reduce various kinds of barriers in the best way possible.
In terms of research, handling, interpretation, communication, and promotion of its cultural and natural heritage, the Municipality of Magdeburg and its stakeholders engage in exchange and cooperation with networks, cultural routes, and European projects such as “Garden Dreams – Parks and Gardens in Saxony-Anhalt”, “Route of the Romanesque”|TRANSROMANICA, the Hansa, the “Blue Ribbon”, the “Elbe Fortresses” or the INTERREG Europe project “Recapture the Fortress Cities”.

Magdeburg counts approximately 240,000 inhabitants including 20,000 university and college students. It is the state capital of Saxony-Anhalt situated in the heart of Germany amid the Berlin-Hanover-Leipzig triangle. In 2019, Magdeburg hosted 420,000 tourists spending 730,000 nights in the city’s official accommodation businesses. The number of day-trippers summed up to 10.8 million.